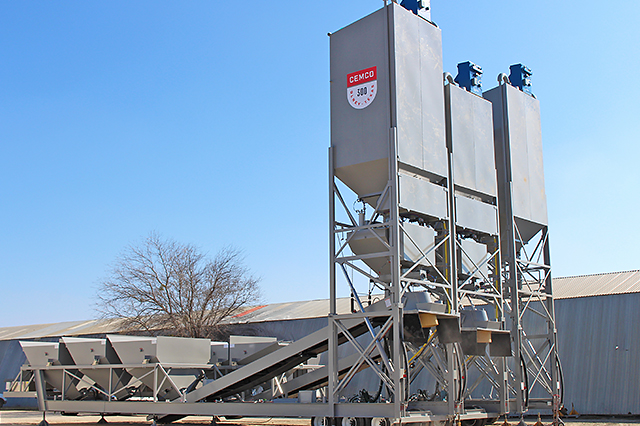 COMING TO A JOB SITE NEAR YOU

According to Statista, cement production has steadily increased in America from 67.2 million tons to 89 million tons, and cement production has remained constant worldwide since 2013, checking in at about 4.1 billion metric tons of cement. The production of concrete has become indispensable to the growth of modern societies and is increasingly so in the United States. Just like any other process in modern society, concrete production must be completed quicker, be more individualized, and have the mobility to be placed in a location to fit the job’s needs.

Historically, contractors found it valuable to develop a system that could batch concrete but had the capability of being moved and built to fit location specifications. L.F. Perry started using portable concrete batching systems in 1963, which were an effective method of increasing productivity and alleviated the pain and frustration associated with traditional concrete batching. By 1970, L.F. was manufacturing mobile batching plants for end-users, becoming the first to do so. Cemco, Inc. was officially started in Olney, Texas, in 1975. Cemco, Inc. began adding variations of their batching plants as well as feeder conveyors and central mix units. Today, Cemco, Inc. offers a full line of equipment that can be utilized in a wide array of industries and applications. Their highest rated product can produce up to 340 cubic yards of concrete per hour!

Mobile concrete batch plants are a boon for temporary production areas or operations where equipment will only be needed for specific amounts of time. Mobile concrete batch plants have the added bonuses of requiring less installation space, utilize a far easier set-up than traditional concrete production, offer a far more economical solution when producing concrete, don’t require foundations or infrastructure, and can be cleaned up and moved quickly after the job is finished.

Cemco’s mobile concrete batch plants are complete units that can be towed, set up, and ready within a few hours. Only a few workers are needed to level the plant’s footing and erect the cement silo. The batching plants are also self-contained, including a diesel-powered engine, high and low level indicators, dust collectors, air compressors, water pumps, and control systems. This design eliminates the costs and time needed for using cranes during set-up—crane assistance to set up silos can cost end-users tens of thousands of dollars. Cemco’s portable batch plants also have eliminated the need for outside power sources which also saves time and effort. Their self-contained diesel engine powers the hydraulic systems that are applied for concrete batching. Cemco’s self-erecting feature also gravity feeds materials when weighing which prevents issues that are associated with auguring systems. Additional silos, feeder belts, and even concrete mixers can be utilized for speeding up and dispersing concrete in a more efficient manner.

Cemco, Inc. utilizes components manufactured from Cardinal Scale to fill out their weighing systems and provide the kind of reliability needed to save contractors resources and time. In addition to a wide range of industrial and agricultural scales, Cardinal Scale also manufactures strain gauges and load cells at their factory in Webb City, MO. Cardinal Scale’s THBC load cell kits with stainless steel waterproof load cells are used for weighing ground-level hoppers in Cemco’s equipment, while ZX suspension type load cells are utilized to weigh water and cement that is added to the batching process from an overhead silo. Additionally, Cardinal Scale’s 201 model digital indicator is used in conjunction with the Jonel Archer batch controls that are contained within Cemco’s portable batch controllers. In most Cemco applications, four to six Cardinal Scale 201 indicators are used when feeding concrete ingredients into a mixer truck. The 201 aids in parsing sand and rock in the mixture of producing concrete in a de-cumulative manner, which is very accurate and fast. The combination of Cemco’s innovative batching plants and Cardinal Scale’s load cells and indicators offer a precision batching process that adds the exact amount of aggregate material needed to make concrete while reducing waste. This precision adds value and ROI to an already useful and valuable concrete batching system.

“Load cells are an integral part of a concrete batch plant,” says Jared Carter, Cemco, Inc. Plant Manager. “Cemco batch plants need to accurately weigh and discharge materials to achieve Cemco’s standards of concrete production. This is why we partner with Cardinal Scale. Year after year, Cardinal builds and delivers high-quality load cells that help our equipment achieve high standards that our customers expect. From supply chain issues to customer service, Cardinal continues to work hard to meet our demands as an OEM. Having a partnership with vendors like Cardinal Scale is paramount to our success.”

“We are heading into our sixth year with Cemco. They have been a great partner with Cardinal and have genuine loyalty,” states Nick Teer, Cardinal Scale OEM Sales Manager. “We have an open line of communication which allows for process improvement and the opportunity for continuous growth.”

“Cemco purchases shear beam and tension load cell kits from the OEM department of Cardinal Scale. Including a summing box and a panel equipped with our 201 indicators, they use the weight data to mix and disperse concrete. Cemco has been very easy to work with, and I enjoy visiting them and seeing our products as part of their manufacturing process,” says Nick.

As one could imagine, having such a useful concrete production system would draw a large amount of interest. Cemco has a large and wide-ranging number of customers who utilize their portable batch plant systems. Many concrete, ready-mix, and construction material companies find great utility in Cemco’s products. Cemco equipment has also been involved in a large amount of very demanding and unique projects. The U.S. Army Corps of Engineers, U.S. Navy, Nuclear Regulatory Commission sites, FAA sites, wind farms, and private businesses such as Wal-Mart, Lowe’s, and Home Depot use Cemco equipment to produce concrete for their industrial building needs.

Cemco’s high-performance and easy-to-use design has allowed for high demand in a wide array of locations. Cemco’s reach is very widely distributed in the United States, Canada, South America, Europe, and Africa. This has led to some very fascinating applications and stories from traveling to such far-flung locations.

“We offer really affordable batch plants which allows us to get into some pretty interesting situations,” states DJ Meschkat, Cemco Design Engineer. “Although most of our applications are fairly straightforward and normal, our design has allowed us to see some very interesting places.”

“One of the most memorable projects was based in Aberdeen, Scotland about six or seven years ago. We worked on a massive road project, which at the time, was the largest in the European Union. The scope of that project was not something that we normally see,” says DJ.

“We once took a project in Ghana that was eye-opening. The way of life was very different from what we experience. The scale of this quarry project was massive, backed by American and Chinese investment that had bought probably close to $100 million in heavy equipment. What was most strange about this particular job was watching locals cutting rebar with hacksaws. The reason for this was the locals demanded some kind of work for themselves during the project, or they would storm the camp. So, for a meager salary of a few dollars a day, local workers were allowed to cut rebar with hacksaws,” says DJ.

“The only place that I ever felt unsafe was on a road and infrastructure job in Caracas, Venezuela,” states DJ. “The government requested we paint our batch plants Ferrari red which is quite a bit different from our normal paint scheme. Workers were doing road work in the middle of the day—pretty unusual in a place with such high temperatures and humidity. We found out the Venezuelan government does this to show citizens that they are working. The corruption there is so widespread that measures like this are put into place to show people they aren’t being stolen from,” says DJ.

The combination of Cemco’s portable concrete batching plants and Cardinal Scale’s THBC load cell kits, 201 indicators, and ZX load cells offer contractors and customers a very efficient, innovative approach to producing concrete in almost any setting, all over the world.