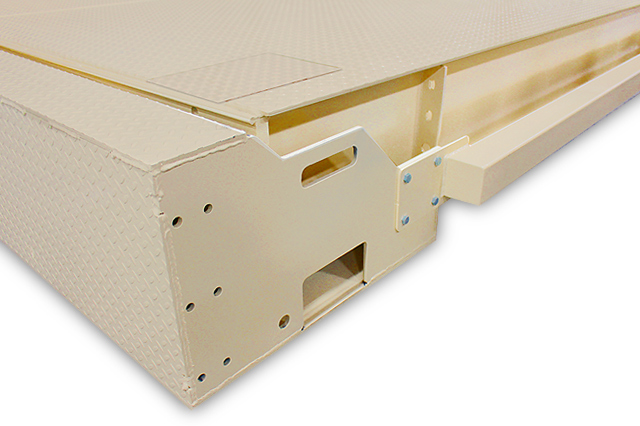 ​Cardinal Scale’s ARMOR portable truck scales offer many benefits beyond those of a permanently-installed truck scale. Portable truck scales offer a modular truck scale design that is engineered to function and look just like a permanent-type truck scale weighbridge; however, an important aspect to note is the ARMOR’s reconfigurable bulkhead feature, which allows the truck scale to vary platform sizes. This variable length feature can be adjusted in order to customize the scale to the environment sizing needs and job specification requirements. Modular variability is an important feature when a scale needs to be used in a variety of locations at multiple job sites.

​The drop-in module for the deck acts more or less as a bridge in the middle of the deck without load cells, and the drop-in module length can be varied to reconfigure the scale bulkhead modules to fit a weighing requirement. Drop-in modules have been historically 20ft in length, but recently a smaller version has been developed that is only 1ft long. Using this new version, a 70ft long deck can be reduced to an approximately 50ft long deck, or a 40ft deck can be reduced to an approximately 20ft deck, or vice versa.

​When it comes to set-up, end modules with bulkheads, hook-on modules, and drop-in modules can be assembled in a matter of hours. Under these modules are spacer tubes that tie into the lower frame. The frame can be lowered onto any flat and stable surface, be it a prepared concrete surface, gravel, or crushed rock (NTEP legality will vary based on state requirements). The lower frame provides a firm foundation for the scale even when preparation time can’t be spent prepping for concrete work. If a single module is all that’s needed to provide a complete weighing platform, a bulkhead section can be placed on each end of the single module. This end module bulkhead completes the weighing platform and permits the contraction of a multi-module platform down to a smaller complete single-module platform.

​When used in a timber, mining, construction, or aggregate job site, most portable truck scales will be moved between sites and switched between a variety of weighing locations on a single job site. The hook-on or drop-in modules can be added or subtracted to suit a site weighing requirements. Extending and contracting portable truck scale platforms provides the customer with a variety of scale size options. The amount of time saved during moving, setting up, and individualizing platform lengths provides heavy industry businesses with a swift solution to challenging environments.

​Cardinal Scale’s portable scale reconfigurable bulkheads are a potent weapon for heavy industries. Having the ability to expand and contract platforms to fit the weighing application allows for the invaluable tool of customization and adaptation to the scale environment. Being able to weigh raw products and heavy commodities in an ever-changing setting provides end users with massive savings in scale set-up and transfer costs.