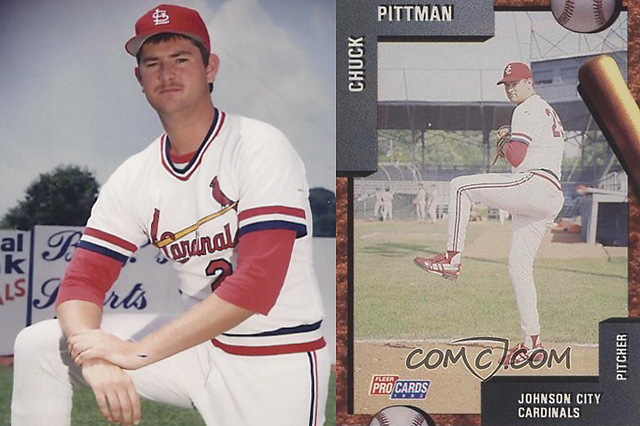 ​Cardinal Scale recognizes Chuck Pittman’s long career with the company, and the interesting journey that led him here. Chuck was recently inducted into the Missouri Southern 2021 Hall of Fame Class, and the group will be enshrined as part of Hall of Fame Weekend on October 30, 2021.

Chuck grew up in Webb City, MO and quickly found he had a good arm from skipping rocks and throwing tennis balls when he was young. He started playing baseball when he was 7 after being inspired by Nolan Ryan, and wanted to become a pitcher. He asked his dad to teach him how to throw a curveball, but fearing it might damage his son’s arm, Chuck’s Dad taught him a forkball instead, which would come to serve him well in his pitching career.

During High School, Chuck spent a great deal of time honing his skills for Webb City’s Junior Varsity. During his junior year, Chuck joined Webb City’s Varsity Team, throwing a shut-out, and then, two no-hitters in his first three games. He finished the season with a 6-0 record and an ERA of 0.43, his earned run average for his junior year being the best in Webb City’s school history. As a senior, Chuck led the team in innings pitched and set the record for strike-outs in a season with 148. He earned 1st Team All-Conference honors during his senior year for his efforts, and also garnered 1st Team All-Conference honors for the basketball team.

After high school, Chuck went to play college baseball with Missouri Southern State University (1989-1992). Over his four years at Southern, Chuck had a record of 29-11 —his 29 wins are still the record at MSSU—and had 10-3 records during his junior and senior years in 1991 and 1992. During both years, Chuck helped the Lions get to the Division II World Series in back-to-back trips, where they received a Runner-Up finish in 1991 and Fifth Place in 1992. Chuck’s highly successful career at MSSU led to him setting records such as ranking third in shutouts, fourth in career starts, fourth in complete games, fourth in innings pitched, and sixth in strikeouts. Chuck graduated in 1993 with a double major in marketing and management.

Although undrafted, Chuck was offered a free-agent contract with the St. Louis Cardinals’ minor league team in Johnson City. Chuck played in the Appalachian League and tried to make the Rochester Red Wings roster, but the position he tried out for was filled by former MLB pitcher, Jim Bollinger.

Realizing the disparity between minor league and major league pay made Chuck want to move back to Webb City and start looking for a job. Chuck interviewed at Cardinal Scale with founder W.H. Perry and was given a very swift offer to start as soon as he could. Throughout his tenure, Chuck has managed the truck fleet, managed the shipping department, worked in customer service, performed environmental safety checks, and currently holds his position as Heavy Capacity Logistics Manager.

Chuck and his wife, Allison, have two children, Chloe and Chase, and they reside in Webb City.