He’s Probably Cooler, If Not Crazier, Than You 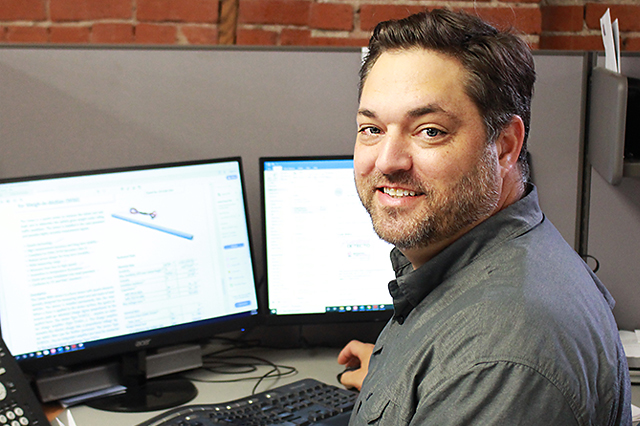 What would you deem prerequisites for being a very interesting person? Wanderlust? Authenticity? An engaging personality? Good stories? Defying death? Trekking across remote locations and locales? Rock climbing? Cardinal Scale’s Sam Wimsett meets all of the criteria above while managing to squeeze in working as Cardinal Scale’s ITS/WIM Sales Manager and in the company’s Customer Support Department.

Sam received his Bachelor’s Degree in Parks, Recreation, and Tourism from the University of Missouri-Columbia in 2003. Most people tend to take a linear progression in career advancement, but Sam’s professional experiences are much more wide-ranging. Sam has worked as a teen center coordinator, firefighter EMT, tour director, corporate travel director, sales manager for an aviation engine company, and owner at his own property management company. Luckily for Cardinal Scale, Sam landed here almost five years ago and is putting his varied interests and experiences to good use in building up WIM sales.

Cardinal Scale’s weigh-in-motion line of scales started in 1997, which makes the technology relatively new compared to the static truck scale models that have been available since 1953. Since Sam’s tenure starting in 2015 he has facilitated major improvements in many of the weigh-in-motion product lines. Sam’s collaboration with end-users regarding SWIM (slow-speed weigh-in-motion) and QWIM (high-speed weigh-in-motion) has brought these technologies to the forefront and made them more relevant. He has identified problems, suggested new features, and recommended new solutions regarding the 825 indicator in WIM applications. He also provides oversight on the many regulations that are stated in weigh-in-motion projects since he has become very proficient in reading and interpreting the extensive weigh-in-motion documentation for bid specs circulated by state DOTs. In addition to helping and collaborating with end-users, Sam also provides customer service to all of Cardinal Scale’s customer support lines, and he enjoys interacting with the company’s dealers on a daily basis.

“One particular installation that was really gratifying was based on the port-of-entry between Costa Rica and Nicaragua. The traffic congestion was horrific: cars backed up five miles, the road was a two-lane, and there were no shoulders on the sides of the road. We placed two lanes of WIM scales with sorting and tracking software to help monitor the thousands of trucks crossing the border every day. Our WIM installation definitely made life easier for those that had to travel on those jammed port-of-entry roads by speeding up the weighing process,” says Sam.

Before Sam worked at Cardinal Scale, he had traveled extensively all over the world. Sam spent time in Kathmandu, Nepal taking part in altitude studies, studying mountaineering, and rock-climbing. He got to witness local culture firsthand and mix with indigenous groups and customs. He also got to learn more about Hinduism and Buddhism, and how those belief systems inform their culture. “One thing that was very striking to me was the Hindu sacrifices: goats, chickens, water buffaloes. Things could get particularly bloody after the water buffaloes were sacrificed.”

Sam was even kidnapped after landing at the New Delhi airport. “The atmosphere at the time was chaotic in New Delhi. The Maoist government had locked the city down and most people were riding bikes. I was pretty young then, about 21, and a friend of mine and I took a cab from the airport. The driver was really pushy and after a short distance, four of his buddies hopped in the cab, held us at knifepoint, and drove us around for a few hours demanding money. Once they figured out neither one of us had much money to speak of, they then tried to force us into using their friend’s hotel. Finally, they took us down a really seedy-looking alley to a travel agency to get numbers of local hotels, but it was the same person answering each call, strangely enough. We finally did end staying at his hotel, which is ultimately how they got some money out of us.”

He also spent time working as an expedition guide in the Northwestern US, specifically in the Cascade Mountain Range. Sam really enjoyed the rock climbing while there, and took clientele on climbs in several different areas. He also spent time in Colorado, on the Missouri River, whitewater rafting. Some of his other guide experience deals with giving tours of interior Alaska.

Sam’s spare time revolves around raising his four-year-old daughter, Cadence, and seven-year-old son, Greyson. His wife, Christina Williams, is on Joplin’s City Council, and works as a project designer for CGA Architecture, Planning, and Design. Some of CGA’s projects include Cardinal Scale’s Administration Building and Joplin’s High School.