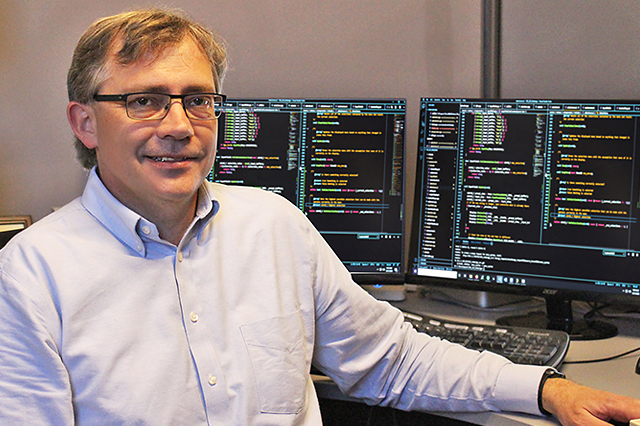 ​Cardinal Scale congratulates seasoned programmer Don Wilson for just over 35 years of service with the company, providing electronic and software oversight that allows many of Cardinal Scale’s various scale and indicator systems to process information in a variety of high-performance functions.

TECHNOLOGY EDUCATION
Don completed his Associate’s Degree in Electronics Technology from Crowder College in 1985, and then received his Bachelor’s Degree in Management Technology/Computer Science from Missouri Southern State University in 1987 while concurrently working at Cardinal Scale, starting in 1985. Don has spent the entirety of his professional career at Cardinal Scale, starting in Electronics as a Production Test Technician, moving to Service Support to provide dealers with assistance in Electronics, and then progressing into writing software for Engineering. His first interest was more devoted to Electronics, but Don eventually became even more intrigued by writing software and that curiosity soon took off.

THE CODE BEHIND CARDINAL PRODUCTS
Don’s work is focused on the industrial side of Cardinal Scale’s business, and he primarily works with C and C++ programming languages, plus he’s also utilized Objective-C, Swift, Java, C#, Javascript, HTML/CSS, PHP, Python, and SQL. He began writing software for WinVRS and WinDDE and then branched out into applications dealing with Cardinal Scale’s ARMOR digital scales, mobile apps for the 225D and 825D indicators, multiple software applications for Cardinal Scale’s line of Weigh-in-Motion vehicle scales, constructing the WIMReader software for Windows/PC, programming for DLC cards, and also the software for Detecto’s MedVue.

PROGRAMMING CREATIVITY
“I enjoyed working on WIM apps the most (for weigh-in-motion highway systems). They were the most complicated and operated at the highest rate of speed,” states Don. “I look at programming as a creative pursuit, not strictly a science. One of the best things about Cardinal is they have allowed me more control to be creative with design. The Remote Weigh mobile app is the best example I can think of: I was allowed to direct most of the structuring with that application.”

THE WIZARD OF WINVRS
Don’s most interesting application was developing the popular WinVRS software that provides vehicle tracking for truck scales. Since Don spent a few years providing technical support and training, he knew what end-users would need out of the software. “I added features and enhancements over many years based on dealers’ and customers’ requests. I think one of the more interesting things I got to do in those earlier days with WinVRS was to create a formatter utility to allow prompting sequences for our unattended Satellite Systems to be customized in the field. Image capture from cameras to record images of trucks was another cool feature I got to add. I also got to do some interesting network features for multiple computers running WinVRS on a network,” Don states.

THE EVOLUTION OF PCS
Regarding the evolution of PC’s, Don thinks that more memory in computing hasn’t necessarily been a good thing. “Programs are not necessarily optimal due to more available memory. When there were more restrictions with memory, programming had to be optimal and precise. Now we have more memory than could have been conceived of in the beginning. This allowance of massive amounts of data can cause more issues if quality is not one of the foremost considerations,” says Don.

TRAVEL ABROAD
Don has also enjoyed the travel associated with the knowledge he has accumulated through his software engineering career. He has been able to visit places such as China, Chicago, San Francisco, and Colombia, to name a few. “Not only has the travel been fun, but I get to collaborate with some interesting groups. Providing training sessions and software customizations have allowed me to meet some great people and solve some interesting problems.”

BICYCLING TO A JOB SITE IN HONG KONG
Don’s most memorable trips dealt primarily with doing custom WinVRS work for landfill and transfer station installations in Hong Kong, China. “Those trips were always interesting. Some of the installations are on very small islands with no taxis or buses. I had to rent bicycles to get around. Once, I didn’t quite follow the road rules on my bicycle (it was early in the morning and hardly anybody around) and got whistled at by a police officer. I told Tony Leung, an engineer I worked with onsite, about it. He jokingly stated I’d better be careful or they would send me to Hei Ling Chau (a small prison island we also worked at). It seemed a little scary working there since they would have a boat drop us off. Boats were not allowed to stay at the dock and there were always guards around us,” he says. Despite the restrictive environment, Don was impressed by the Chinese workers’ work ethic and good sense of humor.

DON’S INFLUENCE ON YOUNG DEVELOPERS
“Don has been a huge influence and resource for the company. He does a lot of things really well and has been a great help—especially to younger engineers,” says Thomas Schuller, Director of Engineering.

ADOPTION FROM INDIA
In his spare time Don spends time with family and his son, Samuel. Don and his wife traveled to India in 2010 to adopt three-year-old Samuel from an orphanage he had stayed at since his birth. Don worked as an Adjunct Instructor at Crowder College from 2001 to 2003, and operates his own software business, Wilsonware.com, which specializes in mobile apps.