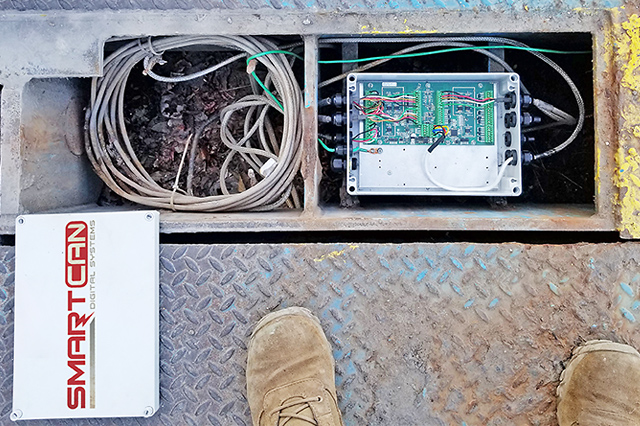 ​J & D Produce contacted Kyle Crane of IWCS Scale to seek a solution for their lengthy diagnostic process. Kyle suggested the Cardinal Scale SmartCan analog-to-digital junction box. The SmartCan system allows scale users to digitally monitor each individual load cell and identify the cell failures quickly and effectively. With the economical-sized enclosure of the SmartCan, and no cumbersome external power supplies to deal with, Kyle had all load cells connected to the SmartCan system. J & D Produce’s multi-platform scale simply required two SmartCan boxes and the assignment of individual groups of cells in the three-scale menu selection of the Cardinal Scale 825D indicator. The two SmartCan boxes were installed by connecting the five-conductor cable from each box and connecting the exiting home run cable to the DLC digital load cell card in the Cardinal Scale indicator. Now the three-scale system had digital-strength information signaling for their truck scale system.

​J & D Produce also wanted the option to access their truck scale weight data remotely since their scale system is unattended. IWCS Scale suggested a simple PC-based solution by connecting the scale indicator to the office PC through their existing network cable. This enabled them to view the 825D indicator display on their PC, and monitor produce shipment weights in real time. In addition, Kyle utilized the Ethernet port on the 825D indicator to connect the scale to his iSite dashboard on the CardinalScale.com website. Kyle can now monitor J & D Produce’s scale in real time while receiving diagnostic alerts when any load cell issues arise.

​J & D Produce is very pleased with the increase in production time and efficiency. The addition of iSite gives J & D Produce the diagnostic power to be immediately alerted of load cell issues and minimizes the guesswork required with traditional electronic load cell systems. This simple upgrade of utilizing a SmartCan digital system creates a leap forward in load cell technology. This will allow J & D Produce to save their hard-earned money and prevent lengthy scale downtimes in the future.