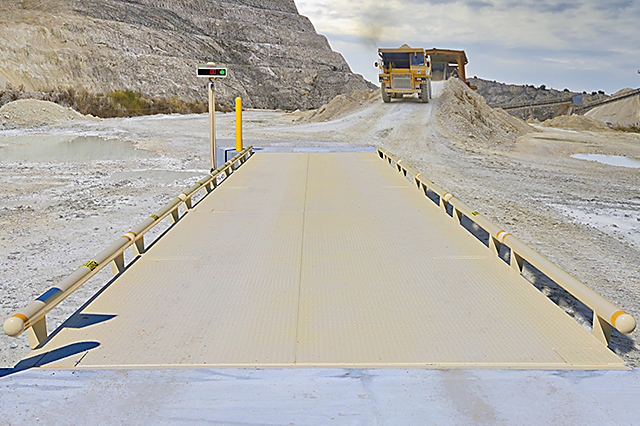 ​Mining is a critical part of meeting the world’s energy demands and requires a great deal from its truck scales: accuracy, longevity, and ability to operate consistently for long periods of time without breaking down. Meeting increasing energy demands requires high performance from equipment used to weigh minerals. Researching the variations of truck scale types and their respective attributes is an important process and advantages should be considered between analog and digital truck scale systems.

Analog truck scales are the most common type of truck scale available on the market. This type of truck scale combines electrical signals from individual analog strain gauge load cells and sums them in a junction box. These combined signals are then fed from the junction box into an indicator and converted into a digital value displayed for the customer to view. Analog load cells come in many variations, but the two most common types used in truck scales are the compression load cell and shear beam load cell.

A truck scale system employing analog load cells has some distinct advantages. Analog load cells are inexpensive, have been on the market for a relatively long period, and they have a fairly wide range of weight capacities.

However, analog load cells have many drawbacks. Analog load cells, because of their construction and electrical characteristics, are especially sensitive to lightning damage. When a 70-foot-long piece of steel (i.e. a truck scale platform used for weighing coal) is placed in an area outside, it becomes a lightning rod that is very susceptible to lightning strikes. Suppression circuitry is added to the overall wiring to divert extreme lightning current from the strain gauges. However, this does not prevent load cells from being destroyed by lightning which require replacement by a trained scale service technician.

In a digital truck scale system, the load cells themselves perform the analog-to-digital signal conversion, and produce a native digital output signal. This important distinction precludes signal degradation associated with analog cells. Digital load cell systems are much easier to manage due to the lack of a junction box and its associated wiring requirements. This decreases installation time needed for scale service technician wiring. Digital load cells can be simply linked to one another in a daisy chain. Sense leads are eliminated since variations in system voltage will not impact the load cell.

Digital truck scale systems, because of their simple design, are very easy to install, maintain, and repair. Since the load cells are more reliable and accurate, costs associated with diagnosis are decreased. Digital truck scale systems have the capability of detecting and diagnosing faults and failures more quickly, efficiently, and precisely. To help augment this valuable tool, this information can be sent to not only indicators, but to remote locations via a software link. Digital load cells also offer the highest protection against lightning strikes due to the transient suppression circuitry that is located directly on each individual digital load cell.

Increasing the value and longevity of their businesses are two of the most important aspects mine owners and managers should consider. Since mining vehicles tend to be much larger than standard commercial transportation vehicles, there are problems that are compounded when weighing minerals during transport. Overloading and offset loading are going to do much more damage to trucks and scales. Truck scales are more likely to break down due to larger cargo sizes, offset loading and overloading, and repeated heavy usage incurred during the lifespan when used in a coal mining operation.

Two other important points coal mine owners should consider are increasing efficiency and lowering operating costs. Truck scales specifically built for mining operations will provide a hedge against all of the aforementioned difficulties while saving money in multiple facets of a business. Using a tool like a truck scale can increase profit margins by maximizing payload, protecting ROI for transportation vehicles, helping businesses better manage fuel consumption, lowering operating costs, and cutting costs related to vehicle maintenance.

Due to the enormity of most mining vehicles, the truck scales that would be most appropriate for such an application would possess a high CLC (concentrated load capacity) rating, have a high maximum capacity, and generally have a wider deck to accommodate heavy-duty off-road vehicles. Scales that possess a tighter I-beam spacing configuration under the scale deck will be more suited to repetitive, heavy loading from large transportation trucks. Structurally, the scale deck will have to be thicker than that of standard truck scale and have load cells that are also rated for a large capacity. Digital load cells are a good option considering the surroundings and environment that usually accompany a mining operation. In addition, digital load cells can afford mine owners or their scale service company the luxury of remotely monitoring scale performance and receiving real-time load information. All of these factors provide fail-safes against potential problems that will cost coal mine owners time, money, and valuable resources.

Downtime due to load cell and scale deck failures can be very costly and should be seriously considered before deciding what type of truck scale will be used for their operation. Analog load cells have the most potential for error due to the vast amount of wiring, junction boxes, and the diagnosis process can vary wildly depending on these factors. They also will be most-susceptible to moisture, fluctuations in weather, and sediment and grime that can get into wiring and entrances in analog wiring systems. Digital truck scale systems either mostly or completely eliminate wiring issues that cause expensive downtime and long diagnostic times that can last for days. Truck scales that feature thinner decks and fewer I-beams under the scale deck are a recipe for potential deck damage. Once a deck has been damaged due to low spots in the scale deck, known simply as “dimpling,” the deck is exceedingly difficult and costly to repair, if it can be salvaged at all. Thicker truck scale decks and more closely-concentrated I-beams provide a more robust structure that is less susceptible to overloading and offset loading that is common in coal mining transportation. Truck scales should also provide I-beam protection that runs the full length of the deck: the ends of the truck scale weighbridge that house load cells might have a pocket with no reinforcement, which increases the probability of weighbridge damage and an inoperable scale.

Regarding environment, it is important to know what limitations are going to be in store for the truck scale in a given application. Sediment and filth are pretty much a given in a mining environment, but there are other factors that are just as damaging. Temperatures, either extreme hot or cold, can present unique challenges for truck scales and hardware peripheral equipment. Once again, analog systems present more challenges due to wiring expanding and contracting, being exposed to moisture, and having more wiring surface area that has the potential to be damaged. Truck decks that protect load cells by keeping them enclosed or elevated from areas that accumulate sediment keep the possibility of load cell damage much lower. Placing load cells in an enclosed area also allows for more protection from damage sustained due to extreme temperatures and moisture. Digital load cells that inject potting into load cell compartments also preclude moisture and sediment ingress from damaging internal components. Truck scales systems that deliver these protections provide more continuous use and prevent load cell and wiring complications.

Mine owners should also consider scale systems that provide protection against scale damage due to truck scale movement spurred on by trucks moving onto the scale, speeds above the recommended limit, overloading, and offset loading. Most analog truck scale systems and some digital truck scale systems utilize bumper bolts, flexures, and check rods; though they are used to restrict deck movement brought on by trucks entering onto a scale platform, they can be damaged themselves or cause damage to the truck scale if “jarred” hard enough. Digital scale systems that allow for passive checking systems that eliminate these pieces of hardware are going to last longer, protect against truck scale damage, and prevent excessive motion. Passive checking systems are much simpler in design and more durable over the life of the digital truck scale; they are also much easier to replace should a load cell or load cell stand become damaged or inoperable.

Mine owners should consider some of these issues when addressing analog and digital options for their operation. The application of their prospective scale, the structural requirements of the scale, the potential costs that might be associated with their application, and the environmental characteristics of the mine where the scale will be operating are good starting points to guide mine owners in the pursuit of finding a scale that will be most-suitable for their business.