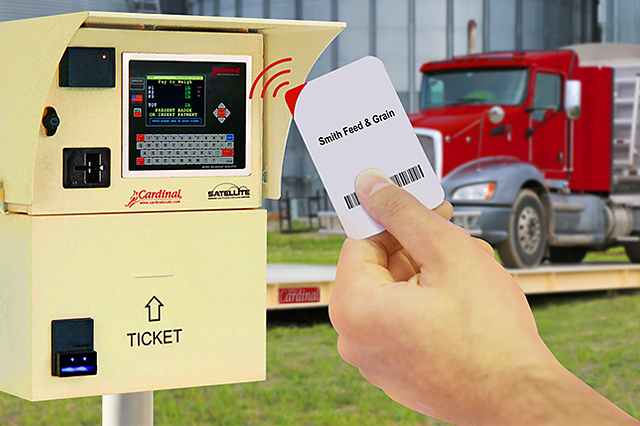 ​There are several advantages to using a contactless truck scale ticketing system: speed, data accuracy, safety, and operational cost savings. Truck scale systems using RFID can greatly speed up truck weight transactions, saving potentially hours per week in a busy operation. This is typically accomplished by using proximity RFID systems with ID cards or vehicle-mount ID tags. Short-range RFID proximity badges can be waved 3-5 inches from an RFID reader positioned on a pole, unmanned weighing kiosk terminal, or outdoor-grade ticket printer installed near the truck scale (if a printed ticket is needed), or long-range readers can scan the width of a truck scale platform (generally up to 15 ft) with the vehicle-mount ID tag typically mounted to the vehicle’s fender. Weighments can be as simple as ID entry using the proximity ID, with relevant data pre-entered into memory and associated to the ID, or full-blown WinVRS vehicle recording system data integration with all of its more sophisticated associated data recording. Both of these systems allow for true contactless ticketing.

Utilizing RFID readers for truck scales greatly speeds up the weighing process since vehicle IDs are stored with the RFID tag and don’t require the driver to wait on a manned attendant to record the weight transaction and the driver doesn’t need to get out of their truck, thus saving time and labor and also improving safety. The RFID scan takes only a few seconds and is recorded automatically in the data collection system. An outdoor-grade ticket printer, such as Cardinal Scale’s WINENCL-P, can also be installed if a printed ticket is necessary. Automatic RFID scans avoid the potential for operator error due to manually keying in the wrong ID, so data accuracy is improved. This alleviates the need for a manned scale house operator to be on staff, offering substantial labor savings. Truck drivers don’t need to get out of their vehicles and walk around on the scale platform for any part of the weighing process, which avoids the potential for safety liability due to injuries.

Truck scale RFID systems generally use a long-range remote display, such as Cardinal Scale’s SB600, to allow the truck driver to see their weight across the scale platform and receive visual verification. The remote display’s built-in traffic light signal can direct vehicle traffic on and off the scale and act in place of a human attendant giving instructions.

RFID contactless scale ticketing is generally more valuable on closed-loop systems with repeat-use trucks weighing on the same truck scales and isn’t as useful in weighing operations that primarily involve the general public coming to the scale for one-off weighments.

Additionally, Satellite unattended weighing kiosks allow for data to be entered remotely without the need for a scale attendant. This type of system utilizes an unmanned weighing terminal installed at the truck scale where the driver would interact with the scale’s indicator with self-prompting menus, ticket printer, and/or RFID reader in order to conduct their weighment. The truck driver keys in their truck ID and related info on the indicator’s keypad or uses an RFID scanner for their badge at the kiosk. The unmanned kiosk will then print a hardcopy weight ticket for verification and recordkeeping.

Contactless scale ticketing systems typically include the truck scale itself (either one scale or two for inbound/outbound weighing), plus a weight indicator, RFID reader –either short-range (typically scans 3-5 inches) or long-range (typically scans up to 15 ft and is more costly), RFID badges, remote weight display, related cables for connectivity, and vehicle recording software on a PC. The RFID reader can be mounted on a standalone pole, or additional options for hardcopy ticket printing can include an outdoor-grade ticket printer such as Cardinal Scale’s WINENCL-P or an unmanned weighing terminal such as Cardinal Scale’s Satellite with an integrated ticket printer. These systems can all be easily installed by a scale service company.

Incorporating office software into a contactless ticketing system greatly enhances the amount of data collection information that can be stored, and the way reports can be generated for transactional workflows. Software such as Cardinal Scale’s WinVRS vehicle recording system keeps track of vehicles, accounts, orders, materials, and more. Unique, user-defined fields allow operators to easily configure the system to meet specific needs and a wide range of reports are available to provide period histories, material totals, customer info, and more. WinVRS software is installed on a PC that is connected to the truck scale’s indicator, typically by Ethernet or USB, and the indicator is connected to the RFID reader. WinVRS allows a virtually unlimited number of IDs, and it can store tare weights for every vehicle so that the truck’s empty weight is automatically removed to arrive at the commodity weight of the load.

Cardinal Scale also offers the Pathway mobile app which allows the truck driver to enter data on their mobile device from the cab of their truck while weighing. Pathway provides all of the standard truck scale ID storage functions that are normally performed at the weight indicator directly from a smartphone, with virtually unlimited IDs and transactions. While offering some unique and helpful features, there are limitations with this system since it requires a Wi-Fi connection to link with Cardinal Scale’s 825 weight indicator, and also Pathway doesn’t offer a hardcopy ticket. Wi-Fi range is important since the mobile device has to be within range of the Wi-Fi and logged in to work correctly. You can however e-mail detailed tickets with up to four customized self-prompting IDs directly from your mobile device. Pathway prompts for in-and-out, two-pass weighing with transaction tickets generated for Gross, Tare, and Net.