Questions to Consider Before Purchasing a Truck Scale 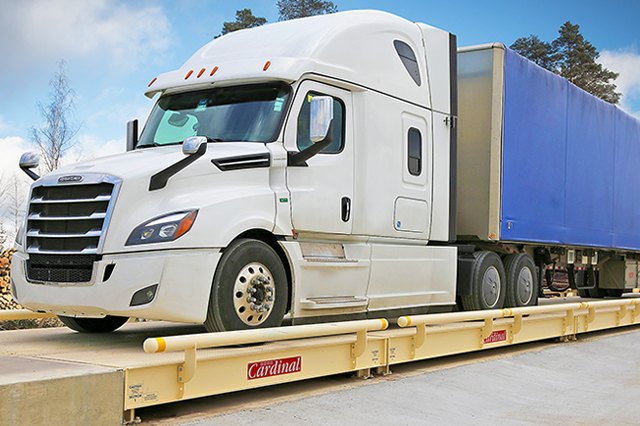 Electronic truck scales and analog load cells have been the standard type used in solid waste weighing for a long time. Unfortunately, there are many pitfalls that come with utilizing this older technology. The following questions explore what truck scale buyers should consider if they face chronic issues with truck scale load cell replacement, communication errors, and the expenses associated with truck scale downtime and the newer alternatives that are available.

1.) Have You Factored in the Cost of Downtime? Are Scale Disruptions a Regular Part of Your Truck Scale Ownership Experience?

Most truck scale manufacturers still offer electronic scales that feature analog load cells. Analog load cells require time-consuming wiring and load cell fault diagnosis. Analog load cells are also much more prone to fluctuations in temperature and wiring degradation and damage due to moisture and sediment, but newer technology on the market is available. Digital load cells generally feature stainless steel bodies to protect internal circuitry and some models use patent-pending potting compound to seal all internal voids against moisture ingress. These load cells can be daisy-chained together with waterproof load cell cables and there is no junction box that is susceptible to water and lightning damage. Digital load cells can be remotely monitored through remote management software so the user’s scale service company can be alerted to a load cell malfunction. Time spent having to randomly diagnose wiring failures is eliminated, and costs associated with lengthy diagnosis periods are also minimized.

Some digital load cells feature injected potting that completely fill the void within the load cell that adds another layer of protection for digital load cell wiring. Load cell failures associated with exposure to water and electrical surges are greatly reduced and load cell replacements become much less frequent.

In the event that there is damage to the load cell, digital load cells can be easily swapped out and replaced quickly. Technicians of any level can complete such a simple task, and your scale can be back to running in a fraction of the time. Electronic truck scales with analog load cells still rely on time-intensive traditional wiring methods that can keep a scale out of commission with longer waiting periods to find the source of the issue.

If the scale is to be positioned in a location where chronic downtime is going to be a problem, digital load cells provide the greatest solution to preventing unwanted interruptions and costly load cell repairs and replacements. Lightning-fast load cell diagnosis and quick-and-simple load cell replacement with superior protection create a massive windfall for the end-user that no longer needs to be squandered.

2.) Would You Like to Have the Capability of Remotely Monitoring Your Customer’s Truck Scale to Diagnose Load Cell Issues?

Remote, cloud-based software management systems communicate with digital load cells and provide scale service companies the ability to remotely diagnose truck scales that they have installed from their PC or smartphone. The traditional method of having to randomly check wires to diagnose load cell and load-cell related failures is obsolete. Valuable time spent finding faulty wiring and having to pull wires is no longer necessary. Scale dealers can oftentimes know in advance which individual load cell has failed and the cause of the cell failure, so they can take the necessary equipment to the job site in their work truck.

Remote, cloud-based software management systems allow truck scale dealers to have a geographic view of digital truck scales they’ve installed. Each site displays a list of criteria related to that truck scale site and a load cell diagram will display the orientation of the load cells and note which cell is failing. Load cell data can be accessed to show diagnostics related to the cell regarding voltage, weight, calibration, and temperature readings. Dealers can immediately access the root cause of the failure and go to the truck scale location knowing which load cell needs to be replaced and why, so they can stock the correct equipment to take.

Remote, cloud-based monitoring can also provide notifications to dealers related to load cell cables and home run cables as well. The truck scale’s indicator can also be scanned for errors remotely. Scale dealers can access the status of peripheral equipment and provide a more complete look at the scale’s data transmission system as a whole.

If truck scale owners do not have the capability to actively monitor your truck scale system, critical time spent searching for the root cause of the load cell issue can be rather extensive, depending on the nature and severity of the failure. This saves customers time and money in service and maintenance costs.

3.) Is Your Truck Scale Application Subject to Extreme Temperatures?

Digital load cells feature a much more simplified wiring system than an analog truck scale system. Generally, within an analog eight-cell scale system there are up to 100 wires that have to be prepared and terminated correctly. Traditional analog wiring systems have several runs of wiring that can be exposed to the normal expansion and contraction caused by temperature fluctuations. Digital load cells are connected point-to-point in a “daisy-chain” manner with shielded PVC cables; this reduced total wiring and greater wiring protection lessens the damaging effects of severe heat and cold on a truck scale system.

4.) Is Your Truck Scale Subject to Damage from Dirt, Grit, and Grime? Are Your Load Cells Exposed to Water?

Some truck scale manufacturers set their products’ load cells just barely above the ground level of a truck scale. Generally, most failures that are associated with debris and sediment in solid waste build-up happen at the base of the truck scale near ground level, which greatly contributes to corrosion. Digital load cells are given an extra layer of protection against the filth that typically accumulates under truck scales by being situated much higher up in the truck scale weighbridge.

If, by chance, water levels rise high enough to expose digital load cells to moisture, most are rated at IP68 or IP69K for resistance to solids and moisture contamination. Their stainless steel casing prevents water from entering the load cell and damaging valuable digital components that transmit weighing information. Additionally, some load cells are filled with potting compound to preclude ingress from particulate or moisture contamination.

Some truck scales feature the added bonus of self-cleaning. Some digital load cells rest on top of a cup-and-ball system that grinds up sediment and pollutants that might settle in the receiver cup from day-to-day operations. Normally this accumulation of pollutants would be left to build up and cause issues with load cell integrity or might cause inaccurate readings by binding up the load cell stand mobility, but this self-cleaning feature can help protect the load cell modules from incorrect weighing. Additionally, load cell cables generally include rat-proofing protection from nibbling rodents.

5.) Does it Take Your Scale Service Company a Long Time to Change Out Load Cells?

One of the most important upgrades the digital load cell offers is the ability for truck scale dealers to change out the load cell in a matter of minutes. Normally, with analog load cells, dealers will have to check, replace, or pull a whole host of wires from the summing box when changing one out. Now, digital load cells can be removed and replaced in as little as five minutes without any specialized equipment.

Electronic truck scales with analog load cells require many more moving parts. With an eight-cell system there are up to 100 wires that have to be prepared and terminated, up to 14 configuration jumpers to be set for proper operation, and sense lines must be utilized to regulate excitation voltage. This complicated wiring system lengthens time spent when trying to simply replace a load cell and calibrate it.

Ease of use is also continued with installation or replacement of digital load cell (DLC) cards or mainboards in the truck scale’s weight indicator. Indicators can detect whether either option has been replaced using checksums and board identification numbers. The new DLC card or mainboard will be reconfigured to the existing scale by the indicator acknowledging the new card and asking the user to verify if it is new. This simple reconfiguration process saves time and effort.

6.) Are Lightning Strikes and Power Surges an Issue for Your Truck Scale?

Truck scales, due to their composition and size, are a magnet for attracting lightning. Many times, these scales are placed in an outdoor area that is exposed to the elements. The main front of protection against lightning strikes and power surges lies in the junction box. Unfortunately, if the junction box is compromised it can cause damage to the whole load cell weighing system. One or more of the load cells can be damaged in a traditional load cell arrangement, which can come at a great cost to the truck scale owner.

Gas discharging tubes that divert excess voltage from lightning and power surges are normally placed inside the summing box of analog load cell systems. Digital load cells have the apparatus of discharging excess voltage placed in each load cell. This ability for each load cell to individually protect itself provides another line of protection for the whole load cell system. If a lightning strike or power surge happens, one load cell has the capability of preventing damaging surges from passing onto other load cells.

7.) Do You Frequently Suffer from Data Transmission Errors? Do Your Analog Load Cells Recurrently Send Incorrect or Misleading Readings?

The digital load cell’s signal content is much different than the analog load cell’s content. The digital signal is composed of binary information that is commonly found in computer data transmission. This digital transmission stream is not prone to interference from outside influences such as temperature, electromagnetism, and radio frequencies and signals. Digital load cells will not suffer from signal degradation caused by external influences like analog load cells.

Load cell and wiring repairs can be incredibly costly—not only monetarily, but in scale downtime as well. The lack of certainty in being able to properly diagnose a truck scale’s failures can result in a great variance of time spent and the costs associated with correcting the issue. Now, truck scale users have the power of knowing what is happening in real time. The reassurance that the system in place will correctly diagnose and expedite repairs is a great boon to the truck scale owner. In addition, advantageous load cell placement within the truck scale, protection against lightning, water, and debris, and the simplicity of replacing load cells provides a complete system of protection against the most depleting and common causes of truck scale downtime.

Digital load cells protect the investment in what is sure to be a major financial consideration. Digital load cells offer not only the best defense against weather, water, lightning, and debris build-up, but do so in an expedient and cost-effective manner. Time and money are very precious commodities, and the digital truck scale provides the best solution needed for giving customers back control of both.