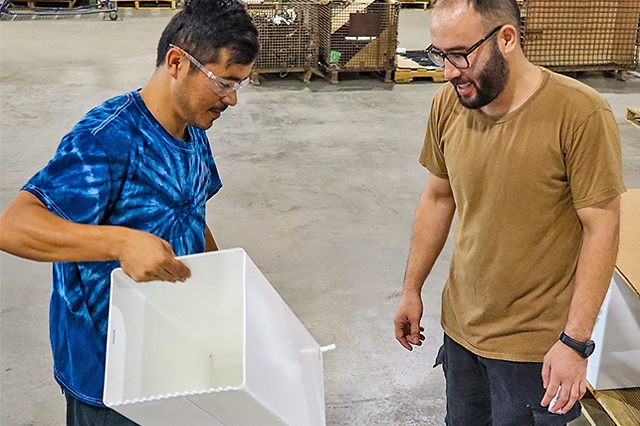 Jawid and Sayed Among 76,000 Afghan Refugees Who Came to the US Following Taliban Takeover

​For two families who recently fled Afghanistan, jobs at Cardinal/Detecto Scale are part of building a new life in a new country.

Mohammad “Jawid” Farahmand, and his friend, Sayed Susavi, both worked with US military forces in Afghanistan, but fled to the United States as the Taliban returned to power in Afghanistan.

“I worked as a target analyst, helping the Americans with captured Taliban enemies,” says Jawid. Sayed also worked with the US military, spending most of his time with Special Forces.

But with the withdrawal of American protection, both knew they and their families had to leave.

“We could not live there,” says Jawid. “We would have been arrested and killed. 100 percent. And they would have also killed our family due to the Taliban’s different ideology.”

Since the Taliban entered Kabul late last year, taking control of Afghanistan, the United States has welcomed more than 76,000 Afghans forced to flee their country.

“In Afghanistan we had a bad situation,” he says, noting that life is still difficult for his friends and family who remained there. “Many can’t go to school and there are no jobs.”

Jawid says he considered moving to California or Baltimore, but there are already lots of refugees there, and his friend, Sayed, convinced him that the opportunities in the small communities of Southwest Missouri, and the region’s relative affordability, was a better option.

Jawid says life in Southwest Missouri brings challenges. The language barrier is the primary obstacle for them. Also, most of their friends and families are back in Afghanistan, and the cultural differences here are significant as well.

Jawid says he hopes that as the two men improve their language skills, their careers at Cardinal/Detecto Scale will bring improved opportunities as he works to build a life for his family here in America.

“Every day we work hard,” says Jawid. “We work hard here together.”

Their production supervisor, Chad Perry, says he’s thrilled to have the two working at Cardinal/Detecto.

“They are very capable of moving up and on to the next step here,” says Perry.

Perry says he hopes that Jawid and Sayed help pave the way to hiring other refugees in the future.

“They show up every day, they work hard, and they never complain,” says Perry. “Right now they are building step-on cans, but the sky is the limit for these guys. We are excited to have them on board.”