To Paint and Protect: A Powder-Coat Painter’s Work is Never Done 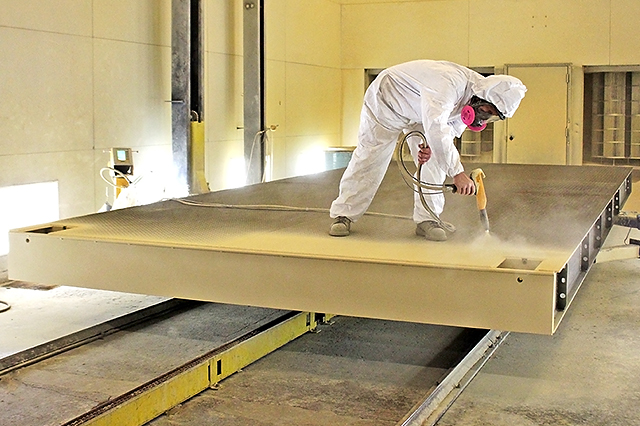 Cardinal Scale’s truck scales offer many innovative features that help them stand out from other truck scale manufacturers. The most noticeable attribute that seems to be constantly understated is the paint that is applied to truck scales. Something considered as simple as paint belies the utility and complexity that goes into the powder coating process. Cardinal Scale’s powder-coating process is very unique, and so is the man who applies it.

Martin McQuade has been the Scale Shop Powder Coat Painter for five years at Cardinal Scale, and has been applying powder coat paint for almost fifteen years. “I can apply powder coating to anything that is metal. Cars, motorcycles, bathroom furniture, railroad pieces, badging for cars and trucks—you name it, I’ve probably done it,” states Martin.

“Martin is one of the best powder painters we’ve had. He produces great quality,” states Don Southard, Plant Manager.

Martin began learning this unique method of painting out of necessity. While working temporarily as a media blaster for a small local company, there happened to be a shortage of powder coat painters at his facility. Desperately needing to complete orders, he was asked to fill in and learn. Martin received plenty of practice and ultimately became so proficient he started his own powder coating business, American Custom Powder Coating.

Powder coat paint plays a prominent role in Cardinal Scale’s business as most of the industrial scale products manufactured apply this painted method. Powder coatings consist of polymer resins, curatives, and pigments. This paint is applied to metal surfaces via electrostatic spray deposition (ESD) by a spray gun that applies an electrostatic charge to paint particles, which are then attracted to the grounded metal part. The painted scales are then moved to a curing oven where the painted is baked on, giving the scale a very consistent finish that provides high-quality protection against moisture and its potential subsequent damage.

Powder coating requires a considerable amount of skill, especially when avoiding the dreaded Faraday Cage Effect. The Faraday Cage Effect happens when inner recesses and corners of a charged metal lack the requisite charge in comparison to the charged paint particles, which will create resistance to paint adherence. “There are a few ways to deal with the Faraday Effect: One, you should be mindful of the powder flow gun rates and know when to increase and decrease flow rates. Then, you must be aware of gun distance from the scale. You must also be aware of the voltage of the gun regarding powder dispersion. Applying electrostatic paint can be a delicate process so it can take some time to become comfortable with really angular pieces,” says Martin. Martin’s ability to bypass this obstacle is helpful with a truck scale, considering the geometry of a finished truck scale product.

“Every scale has its own set of difficulties, but railroad scales are the most challenging, and also the most fun. We once built a railroad scale that had a grain dump that was just massive—it took up the whole floor! Each section was so large and heavy that it nearly maxed out our crane that moves the scales. We had to move each section very slowly and deliberately to not cause bouncing. I had to start painting from above and work my way to the bottom of the scale,” states Martin.

“Martin is a wild and crazy guy, but that’s the reason we love him. Most importantly, he is a very good painter. We would be worse off without him,” says Ray Elliott, Quality Control.

When not at Cardinal, Martin spends most of this time at American Custom Powder Coating, providing custom paint to a wide variety of products. Car and truck frames, child’s bicycles, furniture, antiques, motorcycle gas tanks, wheels, and fencing are just a few of the items that Martin has painted. “The technology is so advanced that you’re pretty much limited only by your imagination. Glossy finishes, matte finishes, custom colors, added sparkle to the paint: there’s a wide range of things that can be done,” says Martin.

“My most memorable piece would have to be the Webb City sign at the Route 66 City Park next to Cardinal Scale. I painted the top banner portion of the sign and it’s really cool that hundreds of thousands of people see that when traveling Route 66. The fact that it’s part of my community and gets to be enjoyed by that many people is something I’m proud of.” ​