Tuning up Machinery by Day and his Guitar by Night 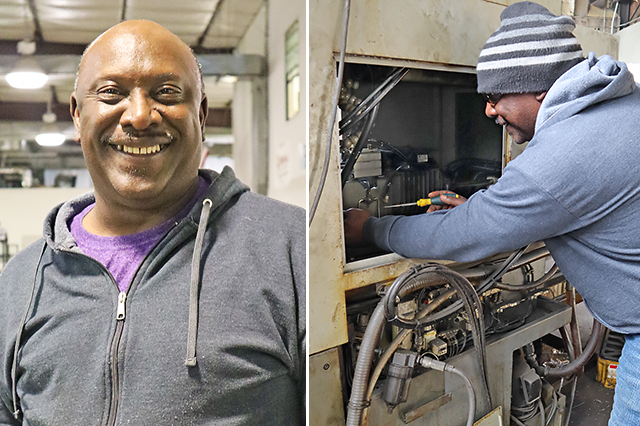 ​At Cardinal Scale, Earnie Hancock needs to be ready for just about anything. As the company’s Maintenance Supervisor, Earnie and his staff of seven Cardinal Scale employees need to have a very diverse skillset so that they are ready to jump in with maintenance and repairs when something arises. Keeping all of the factory’s machinery running optimally is his number one goal to ensure orders go out on time.

“There’s so much,” says Earnie, who has been at Cardinal Scale for almost nine years. “Hydraulics, air, coolant, electricity to deal with, photo sensors. Everybody on my staff has their own little specialty.”

A veteran of the US Marines, Earnie’s background includes work in electric, concrete, construction and factory production. All of his past experience comes together to give him a solid base of knowledge that continues to grow for his work at Cardinal Scale.

“We’re all learning every day,” says Earnie, whose staff oversees maintenance on Cardinal Scale’s facilities and equipment. “It’s definitely a challenge.” But Earnie says it always feels good to meet the challenge.

“There’s just something about going up to something that’s got a problem and figuring out what it is,” says Earnie. “It feels great. As long as it stays running,” he adds with a laugh.

Recently, Cardinal Scale has come to play an even bigger role in the Hancock family. This fall, two of Earnie’s daughters have become Cardinal Scale employees. His daughter Macie works in the Load Cell Department, and his daughter, Lexis, is the custodian in the Royal and Firehouse office buildings.

“I get to see them every now and then,” says Earnie. It’s nice to keep an eye on them.” In addition to his two daughters, Earnie has one son, Aaron.

When he isn’t at work, Earnie can often be found with a bass guitar in his hands.

“I got started playing bass in the jazz band in high school, and I’ve been playing ever since,” says Earnie. “I just love everything about it. It’s kind of like therapy.” Earnie says he especially enjoys playing slap bass, and jazz, on his Fender American, but his interests also include country, funk, and rock. Onstage, Earnie currently can be seen performing in the Joplin, MO area with two local bands: Big Smitty and Blank Earth.